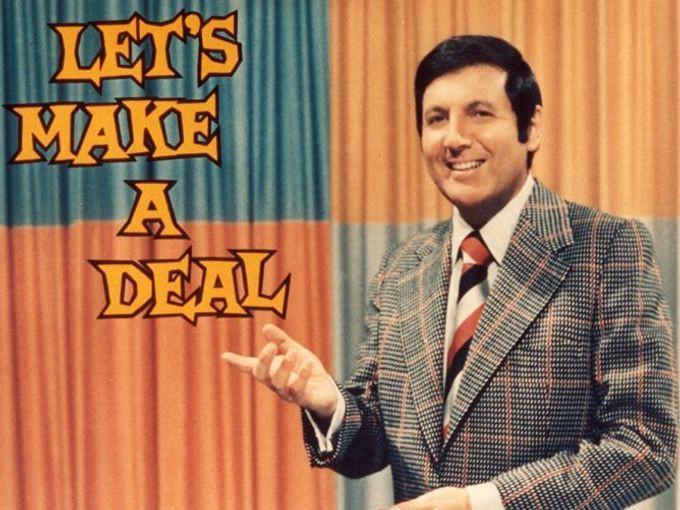 I’m going to tackle the Monty Hall problem because, well, why not?  I’m not a quant and I have never understood the typical explanations.  Maybe you’ve had the same experience.  For instance, The Economist, not generally known for woolly explanations, explained some years back[1] that the solution was because “the remaining probability of two-thirds gets squeezed, as it were, into the third box.”  I was quite surprised to read that probabilities could be squeezed.  Unfortunately, that explanation didn’t make any sense to me then and still doesn’t today.

In the years since, I began to wonder if there was something magical about the problem because every explanation I had read eluded, even baffled me.  I now realize there was indeed some magic being employed, in the form of what Penn & Teller call misdirection.  But before I get to that, let me outline this classic problem.

On his game show, Let’s Make a Deal, the host Monty Hall presents you with a chance to win a new car by correctly guessing which of three garage-sized doors on stage it’s hidden behind.  Is it door #1, #2, or #3?  If you guess correctly, the car is yours.  But if you guess incorrectly, you win one of the two goats hidden behind the other two doors.

Just for clarity, let me point out right away something that is probably obvious: the odds of you correctly choosing the door which hides the car is 1 in 3 and the odds of choosing a door which hides a goat is 2 in 3.  I mention these odds now because, if you’re like me, I suspect that later you’ll think they’re irrelevant.  They won’t be.

OK, let’s play. Let’s say you choose door #1.  While you’re waiting for Monty to open door #1 to see if you’ve won, he surprises you by instead opening a door you didn’t choose to reveal what’s behind it.  At this point, if he reveals the car, the segment is over, you’ve won a goat instead, and it’s time for a commercial.  There’s not much entertainment value in that, so at this point Monty reveals one of the goats by opening, say, door #3.  This draws laughter from the audience.

This is where the magic occurs.  What sets Penn & Teller apart from other magicians, for me, is their occasional reveal of the way tricks are done.  For instance, this video shows them performing the cups and balls trick with clear cups, which reveals exactly what’s under each cup.  Notice, though, Penn’s comments at the 2:55 mark: “This is not juggling, this is called misdirection.”  He’s drawing our eyes to him so Teller can slip a ball under the center cup.  This is what Monty is doing, drawing our attention to the goat.  And during this misdirection, he slips in the most important question of all.

As the laughter subsides, Monty says now that you’ve seen the goat behind door #3, do you want to stay with your original choice of door #1 or do you want to switch to door #2?  This is it, the crux of what has been called the Monty Hall Problem: Do you stay or switch, and does it make any difference?

I said that for entertainment purposes Monty will always reveal a goat and not the car.  There’s a much more important reason, too.  It turns out that this is exceptionally clever misdirection.  If he doesn’t reveal a goat, then there is no question to be asked, there is no Monty Hall Problem.  The Monty Hall Problem can occur if and only if he reveals a goat, so he will always reveal the goat behind a door you didn’t choose each and every time you play.  We never need to consider the chance he will reveal the car.  But by opening a door to show a model holding a mangy goat on a leash, he makes everyone laugh and not think about what just happened.

With one goat gone, most people see two unopened doors and just two choices available, one goat and one car, and conclude that the odds of picking the correct one is 1 in 2, or 50-50.  Because it’s a toss up, there’s no advantage to switching.  But that’s incorrect.  Monty’s reveal of the first goat hasn’t changed the original odds of picking the car at all; it has only changed the certainty of what results from your answer to his question.

To see this, suppose for a moment that immediately after you selected door #1, and before Monty revealed either goat, he had asked you if you wanted to reconsider and choose a different door.  Then, it would have been possible to switch from door #1 to a different door only to discover that the car wasn’t behind either of them.  There were, after all, two goats hidden back there.  But after the reveal, one of those goats is always gone, so if we switch now there are only ever two possible outcomes: you are either switching away from the car or switching to the car.

Now turn your attention away from the goat and back at your original choice.  Remember those odds?  They were 1 in 3 to pick the car and 2 in 3 to pick a goat.

When I looked at the problem this way, I finally understood and could explain the doubling of odds.  I’m sure I was behind the wheel of a minivan driving my kids to some activity when I had the epiphany that the only way to win by switching was to have not won with the first choice.  It seems obvious now.  I think this is a far better explanation than ‘squeezing,’ but surely I’m not the first person to think of it this way.

So why is a simple explanation of the correct solution to the Monty Hall Problem of interest to me, a consultant focused on employee engagement?  Because it highlights the importance of good explanations to understand what’s really going on.  And here I’m influenced by David Deutsch’s brilliant book “The Beginning of Infinity”[2].  The key theme of the book is that only through good explanations can we understand reality.  Of course, he deals with loftier problems than sorting out game show probabilities, but his approach is applicable to all problems.

For instance, when I initially accepted that switching was the correct answer without understanding why, I was simply acquiescing to The Economist’s authority, which Deutsch refers to as justified true belief.  Regrettably, that’s what sometimes passes for explanation at many companies: because we say so.  That’s not only a poor explanation, but the antithesis of what engaged employees want to know.  That’s where this holds lessons for leaders interested in improving employee engagement.  Engaged employees always want to understand.

Good explanations are the hallmark of good communication, whether it’s directed to an individual or to a group or to the entire company.  Leaders should be explaining why they’re pursuing these lofty goals, or why they’ve changed course, or why the company’s products or services are valued and important.  These explanations are connected to the purpose of the company and the direction it’s headed.

If my explanation here gave you the clear and immediate realization of how the probabilities work for this problem, then that’s the effect you’re after when communicating to your team.  A clear explanation that guides and informs actions and decisions.  Save spectacles for celebrations and avoid distracting your employees when you want to explain important information.

Employees shouldn’t have to take your word for it; you should explain it so that they understand.  And when employees understand why, they’re able to see the connection between what they do each day and how it helps the company achieve its goals.

And that’s one of the critical elements of an engagement culture.

Michael W. Roberts is the Founder and Chief Strategist of groHR Consulting, Inc.

[2] This will seem like hyperbole, but it isn’t: if you only read one book this year, it should be this one.